To express their gratitude and pay it forward, Anton and Vivienne both left gifts to their respective universities in their wills — his to UBC and hers to SFU. 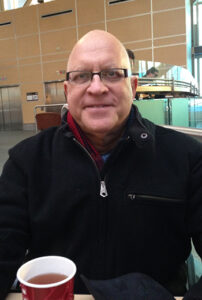 “Anton came to Canada from Holland when he was nineteen,” says Vivienne, a Canadian leader in trend forecasting who mentors designers and retailers on strategies, research, and analysis within the fashion industry.

As an alumnus of UBC, Anton graduated in 1977 with a BSc in Science before completing his graduate studies in Urban Planning.

This experience would become a stepping-stone to a successful career that would span government, industry, and education. Among many notable accomplishments, Anton co-designed Vancouver’s first rapid transit line. He also promoted international trade partnerships in BC’s tech, environmental, and energy sectors before joining UBC as Associate Director, Development for the Faculty of Science, where he helped raise unprecedented funds for research.

“I’m glad UBC accepted him, because it was the best job he ever had,” says Vivienne. “He loved working with professors, researchers, and the people in Development.”

When Anton was diagnosed with cancer, they both decided to re-examine their wills and evaluate what really mattered to them.

“We really credited our universities for giving us the skills and education that helped us throughout our lives,” says Vivienne. “And so we said we’d like to support students. We decided to set up bursaries, because we both felt strongly that people should not be held back because of financial difficulty.”

The wills were prepared so both gifts would come from the surviving spouse. Although Anton passed away in May, his legacy will live on through a gift that will support students enrolled in any degree program in the Faculty of Science.

“To me, an education is the best gift you can give, because it changes lives,” says Vivienne. “Today, I can see students having a great deal of difficulty dealing with massive debts. Anton and I both felt it was the least we could do — to give someone the gift of education and help set them on their own path.”