After an amazing life slowed down by the brain disease Primary Progressive Aphasia, the one-of-a-kind Craig passed away at home in West Vancouver on September 25, 2020 at the age of 64.

Born in Vancouver, Craig attended Shaughnessy Elementary, Eric Hamber Secondary, and UBC where he was a member of Beta Theta Pi fraternity and a member of UBC’s Big Block Club. He graduated in 1979 with a Bachelor of Commerce degree.

Craig loved and played soccer from a young age, eventually playing for the UBC Thunderbirds from 1974 to 1978 and was on the 1974 team that won UBC’s first ever National championship. Craig’s love for soccer extended to coaching his daughter Chantal’s community soccer teams for years.

Craig started his professional career as an articling student with Price Waterhouse and received his Chartered Accountant designation in 1981. He worked on the audits of several of the firm’s largest forest industry clients before moving into the consulting practice. Craig was admitted to the firm’s partnership in 1995 and was a frequent speaker at forest industry events across the country, often being called upon by the media for his views on the trends and transactions shaping the industry. He retired from his role as the Vancouver Consulting Leader in 2011.

Craig lived life to the fullest. He knew how to work hard and play hard. There was never a dull moment in his company. He was often seen riding his bike (or unicycle) across the Lions Gate Bridge with his beaver helmet and Barbie basket, on his way to work. Sakinaw Lake was his retreat where he water skied, enjoyed the fire, the odd cigar and a good scotch. You could often find him hot tubbing listening to sixties/seventies music (especially The Rolling Stones) both at home and at the lake. Craig was a true adventure seeker and he travelled extensively, attending 4 FIFA World Cup soccer tournaments and 3 Olympic games and for many years he attended the Hong Kong 7’s rugby.

Craig taught by example. His positive attitude and gracious handling of a devastating brain disease carried his loved ones through hard times. He showed everyone around him how to be patient, hard-working, frugal, fun-loving and to never sweat the small stuff. He was truly an inspiration and never had a negative thing to say about anyone or anything. Considered a legend by many, above-all, he was an exemplary friend, father, husband, brother and son who appreciated the value of relationships. He will be dearly missed by all who were fortunate enough to know him, but especially by his loving wife Trina, daughters Tessa and Chantal, mother Joan, sister Margot (Geoff Langill), nephews Brent (Christine), Adam (Greta) and Ross (Erika) and mother-in-law Arla Owen. He was predeceased by his father The Honourable David Hector Campbell, daughter Samantha, and father-in law Tom Owen.

The impact of your support

In memory of Craig, please consider making a donation to the Djavid Mowafaghian Centre for Brain Health and help researchers and clinicians work together to pioneer critical advances in patient care and research.

Help us reach our $50,000 goal!
Ride for Brain Research in Honour of Craig Campbell 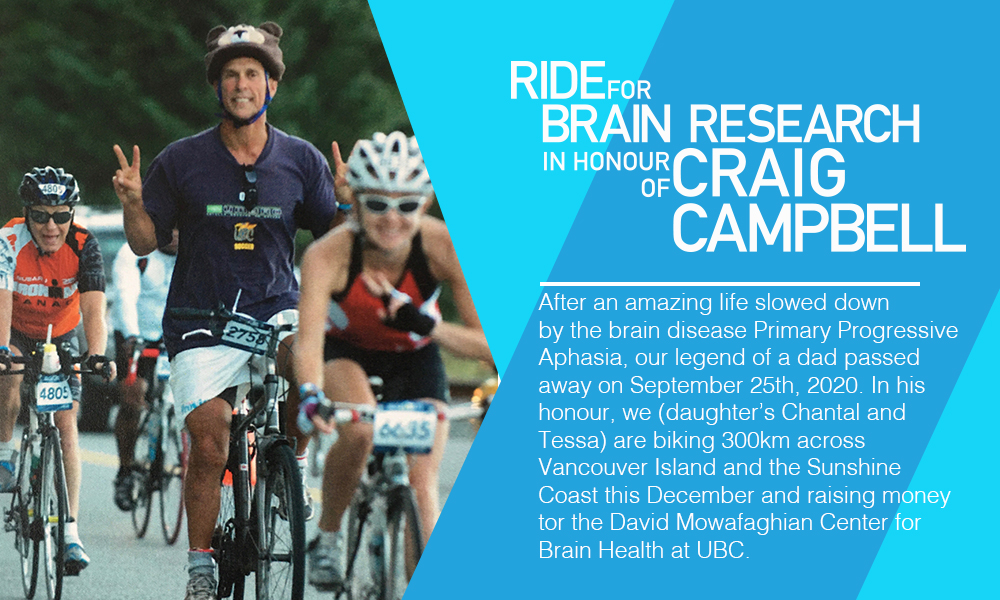 To honour this legend we call our dad, we (daughter’s Tessa and Chantal Campbell) are embarking on a long, cold and wet bike ride along the Sunshine Coast and Vancouver Island this December to raise money for brain research.

Craig was an avid cyclist so we thought what better way to honour him?
From December 27-30, we will ride 300kms across the Sunshine Coast and Vancouver Island. 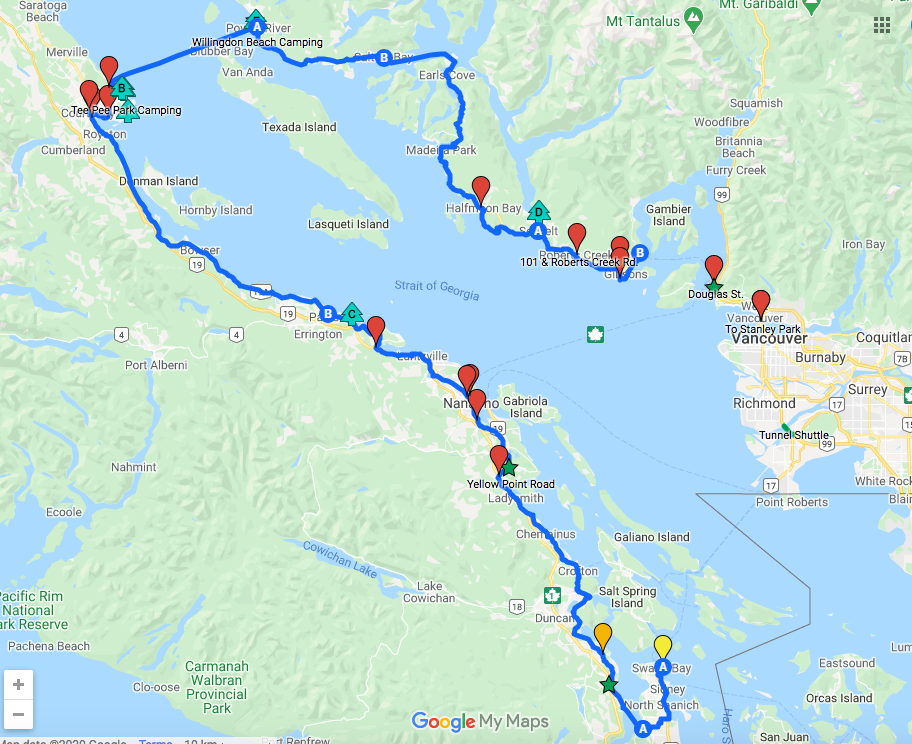 Our dad was involved in many brain research studies around the world including at the Djavad Mowafaghian Centre for Brain Health. He wanted to help these researchers and clinicians treat and prevent diseases like Primary Progressive Aphasia and other Frontal Temporal Lobe Dementias.

To support our ride in memory of Craig, please consider donating to the Djavad Mowafaghian Centre for Brain Health.

Thank you in advance for your support – every bit counts!

Contribute to keep telling this story

Find a memory Create a memory