Michael Audain recognized that we would soon be losing a generation of scholars and elders who specialized in the artistic heritage of BC’s First Nations, at a time where there continues to be a growing interest in contemporary Indigenous art in BC and around the world.

Like many other children who reside on Canada’s uncluttered West Coast, Michael Audain spent his time exploring the forests and seashore near his home in Victoria—fascinated by the wild animals that he encountered from near and afar—the ravens, the eagles and the orca whales.

Asked about when he first became interested in art, Michael noted that there was no public gallery to speak of in Victoria in the 1950s. However, he fondly recalls that, “When I was 10, I started going to Saturday morning lectures at the Royal BC Museum. Afterward, I would wander around the various galleries, keenly interested in the art of the original people of this coast that included the images of the many animals I remembered from my adventures in the woods. That experience stayed with me, as my first introduction to visual art was through the marvelous work of First Nations artists.” 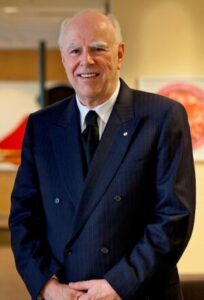 Michael went on to earn three degrees at UBC and become one of BC’s most successful home builders as founder and chairman of Polygon Homes Ltd. Perhaps even more than his professional success, he is well-regarded as one of the country’s most generous philanthropists and an ardent champion of the visual arts.

Building on his lifelong respect and admiration of First Nations art and his support of his alma mater, Michael helped create the Audain Chair in Historical Indigenous Art at UBC with a $3 million gift through the Audain Foundation. The gift will be matched by the university to create a $6 million endowment allowing the university to hire a leading scholar to study, preserve, and celebrate historical Indigenous art.

The new position will complement UBC’s leadership in Vancouver’s dynamic contemporary Indigenous art scene by studying works from before or around the time of European settlement, in addition to researching West Coast Indigenous artworks in the context of global Indigenous art history.

Michael’s motivation for investing in the Chair was simple: he didn’t want the study and appreciation of the art that spoke to him as a child to be lost. He recognized that we would soon be losing a generation of scholars and elders who specialized in the artistic heritage of BC’s First Nations, at a time where there continues to be a growing interest in contemporary Indigenous art in BC and around the world.

“There is a need to develop knowledge and also appreciation for these art forms which have been handed down to us from time immemorial,” Michael says.

Dana Claxton, associate professor and head of UBC’s department of art history, visual art, and theory, says the new chair will contribute to research that will encourage a new understanding of Indigenous art, history, and culture. “I’m so excited because this position allows for a very particular, focused time spent with historical cultural objects, historical cultural belongings, and historical cultural production. And any type of reinterpretation of that work […] adds to new ways of being.”

The scholar will have access to renowned collections of Indigenous art and artifacts at UBC—primarily at the Museum of Anthropology—and across the province. Their work will make a tremendous difference in training future generations of leaders and artists to think beyond their inherited thought processes and reconsider the narratives that have shaped Canada’s history.

“I am so grateful to Michael and the Audain Foundation for partnering with us to make the Audain Chair in Historical Indigenous Art possible,” says Santa J. Ono, UBC President and Vice-Chancellor. “The deeper knowledge gained by this scholar will help UBC achieve its mission to build cultural respect and promote Indigenous ways of knowing across campus.”

“I hope the Chair will be an opportunity to enhance the knowledge and respect for historical art making by Indigenous people, both on the West Coast of Canada but also throughout the world,” Michael says. “Because there is a tremendous power and distinction in Indigenous art.”