In 1956, Dr. Wilma Elias was the first woman to obtain a PhD from the University of British Columbia. When she passed away in 2018, her generous bequest to UBC created the Dr. Wilma Ethel Elias Scholarship in Chemistry—meaning her legacy will continue to empower new generations of female chemists.

The endowed award will provide scholarships for women studying chemistry at a graduate level, such as recent recipient and bioanalytical chemist Ghinwa Darwish.

“As a female scientist, receiving this award makes me feel respected and recognized as a scholar,” says Ghinwa. “It serves as a nice reminder that I am contributing to the scientific community.” 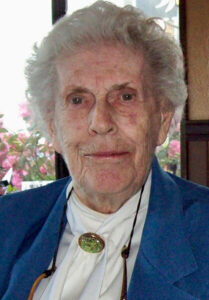 Wilma Elias was born in Calgary, Alberta, in 1925. Following secondary school, she moved to the University of Saskatchewan to study chemistry. Completing her bachelor’s degree in 1947, Wilma would stay to pursue her MA in organic chemistry. She continued with her PhD at UBC in the lab of Dr. Lloyd Douglas Hayward in the Department of Chemistry. Wilma completed her thesis, entitled The Nitration and Fractionation of Whole Wood, graduating in 1956.

For Jade Poisson, a PhD candidate researching polymers and materials chemistry, Wilma’s gift has been crucial for her time at UBC. “The Wilma Ethel Elias Scholarship has relieved financial stress, which allows me to focus more on my research!”

While at UBC, Wilma received several awards—including the British Columbia Sugar Refining Company Limited Scholarship, the Vancouver B’nai B’rith Hillel Foundation Scholarship, and the Powell River Company Limited Scholarship for research in wood chemistry. In 1958 she became faculty in the Department of Chemistry at the University of Victoria—combining her love of teaching and research until her retirement in 1985.

PhD student Aoxue Huang recognizes the Wilma Elias Scholarship as an essential part of her development as a chemist.

“My study in chemistry includes electrochemistry and catalysis,” says Aoxue. “I regard this scholarship as a validation for my efforts in the past—which builds up my confidence to face the challenges I may meet in the future.”

Wilma had an active retirement with international travel, gardening—even teaching herself piano at age 90. She was an enthusiastic member of her Oak Bay community and is remembered as an energetic, independent spirit with an enduring curiosity; admirable qualities shared by her scholarship recipients—UBC’s next generation of women in chemistry research.