The Stellat’en First Nation and Village of Fraser Lake recently celebrated the official launch of UBC faculty of medicine’s Remote Communities Drone Transport Initiative, a pilot project funded by the 2020 TD Ready Challenge examining how drone technology can be used to improve access to healthcare supplies in rural and remote Indigenous communities. 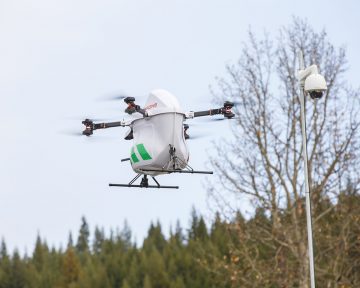 The celebration began at the Village of Fraser Lake in central B.C. with a ribbon-cutting ceremony to mark the opening of the drone launch pad and the first official drone lift-off. A prayer from Stellat’en Elder Archie Patrick opened both ceremonies. A second ceremony at Stellat’en First Nation also featured singing and drumming that represented each of the clans in the Stellat’en First Nation. After the ribbon-cutting here, a drone took off and completed a successful round-trip test flight to the Village of Fraser Lake and back, an eight-kilometre journey.

“It’s a privilege and an honour to partner with Fraser Lake. Obviously, we’ve been neighbours for a number of generations, and it’s projects like this that bring us closer together,” said Chief Robert Michell of Stellat’en First Nation. “This type of project here is unique. As a Native community, we’re at the forefront of the technology. It would be amazing in 10 years’ time to see where this goes. This is definitely a first step, and we’re proud to be a part of it.”

During the one-year pilot study, drones will initially carry prototype packages between the Village of Fraser Lake and Stellat’en First Nation. Once the flights are proven successful, the drones will transport laboratory samples, medical supplies and medications, allowing community members greater access to supplies and services without needing to leave their home community. 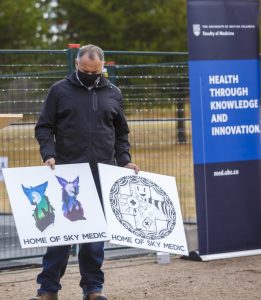 “I’m excited to see what the future has in store for us as technology advances,” said Mayor Sarrah Storey of the Village of Fraser Lake. “Whether that’s delivering medical supplies in an emergency or getting medication or eyeglasses to someone in a remote community—the sky is not the limit.”

The local school children, who attended the official celebration, are gaining first-hand experience working on the project. They have already named the drone “Sky Medic” and submitted logo designs for each of the launch sites.

The initiative will serve as a scalable model with the learnings obtained transferable to enable the introduction of drone transport programs in other rural, remote and Indigenous communities to improve access to healthcare supplies and services across B.C. and Canada. 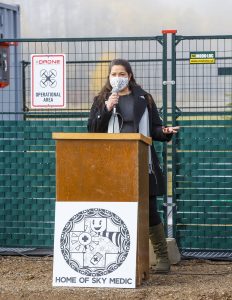 “It’s really important that partnerships come from a relationship-based model. What that means is we can build trust and relationships with one another, so the First Nations voice isn’t just part of the project, it has an opportunity to lead and define that project, from the moment it starts to its completion,” said Dr. Terri Aldred, site lead for UBC faculty of medicine’s Indigenous family medicine program and medical director of primary care with the First Nations Health Authority, a partner on the Drone Transport Initiative. Dr. Aldred is Dakelh from Tl’Azt’En on her mom’s side and Métis Cree and mixed European on her dad’s side, and a member of the Lysiloo (Frog) Clan.

“Indigenous Canadians still have worse health outcomes in almost every measure than non-Indigenous Canadians,” said Dr. Aldred. “By using technology, we have the ability to not only close the gap but actually realize what healthy and thriving means to us and our communities.”

A 2020 TD Ready Challenge grant made the project possible.

“Access to healthcare and the availability of medical supplies are vital for keeping communities resilient during this time,” said Andy Cribb, Senior Vice President, Branch Banking, Pacific Region at TD. “The success of this test launch is an important step toward removing barriers to healthcare that are disproportionately experienced by many in rural and remote communities in B.C. On behalf of my TD colleagues, I congratulate the UBC faculty of medicine on the success of its test launch and we look forward to seeing this initiative expanded to help close the healthcare gap for more people across the province.”