Dr. Sriram Subramaniam first met Dr. Gobind Khorana at MIT in 1987 where he joined Khorana ‘s team as a post-doctorate researcher studying the proteins involved in light absorption. Khorana was already a Nobel Laureate, having won the prize in 1968 with two colleagues ‘for their interpretation of the genetic code and its function in protein synthesis’.

Khorana quickly became a mentor to Subramaniam and they remained lifelong friends until Khorana’s death in 2011. It would be reasonable to assume that their relationship ended then. But Dr. Subramaniam had been deeply inspired by Khorana both on a personal and professional level and has never lost his connection to his former MIT supervisor.

Subramaniam recalls: “Gobind was a remarkable individual at every level. He was relentless in his pursuit of excellence and tenacious in his pursuit of the greatest scientific problems of his time. He was without doubt one of the greatest scientists of the twentieth century, and had great impact on all of us who had the privilege of working with him.”

Indeed, on January 19, 2018, on what would have been Khorana’s 96th birthday, Google dedicated its ‘Google Doodle’ – the clickable drawn image that features on the Google homepage worldwide on any given day – to Dr. Khorana.

Fast forward to April 17, 2019 when it was announced that Subramaniam had been named as the Gobind Khorana Canada Excellence Research Chair in Precision Cancer Drug Design. This Chair is dedicated to discovering and testing new, personalized life-saving cancer treatments right here in BC.

And so the relationship between mentor and mentee had come full circle. Bound by their joint passion for scientific innovation, they now also shared another common bond through UBC: Khorana spent eight years at UBC in the 1950’s and Dr. Subramaniam has now followed in his footsteps sixty years later. In fact, Dr. Subramaniam now lives at UBC – right next to Khorana Park.

UBC will receive up to $10 million from CERC over seven years to support the Chair. In addition, a philanthropic gift of $18 million made to VGH & UBC Hospital Foundation will support the design of precise, targeted and cost-effective drugs for cancer in work led by Subramaniam in partnership with UBC, the Vancouver Prostate Centre at VGH and other research centres. 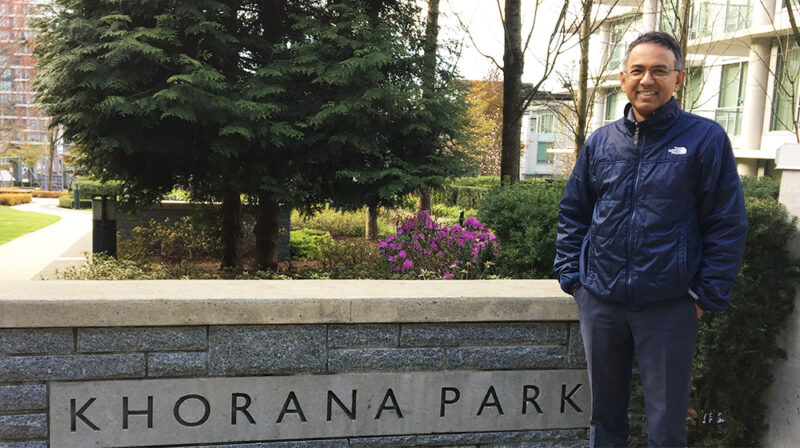 This gift represents the anonymous donor’s commitment to a tradition of innovation in science in BC as a long-term investment in the people of British Columbia. The donor was moved by the story of how Khorana, an Indian citizen, came to UBC from England in the early 1950’s and how UBC had seen the potential of his work. UBC was able to scrape together the funds to get Khorana to BC as part of UBC’s tradition of bringing talent from all over the world to BC. On hearing of the opportunity, and accepting the offer, Khorana reportedly asked: “Where exactly is Vancouver?”.

The work that UBC supported back in the 1950’s eventually led to Khorana’s being awarded the Nobel Prize in 1968. And so the mentor-mentee relationship has borne fruit, as a new chapter of scientific innovation in BC begins.

Subramaniam is recognized as a global leader in the emerging field of cryo-electron microscopy, or cryo-EM, a technology that has sparked a revolution in imaging of protein complexes. Subramaniam and his team demonstrated that proteins and protein-bound drugs could be visualized at atomic resolution with cryo-EM, paving the way for this technology to be used in accelerating drug discovery. The unprecedented worldwide adoption of cryo-EM was recognized with the 2017 Nobel Prize in Chemistry to Dubochet, Frank and Henderson, early pioneers in the cryo-EM field. Before moving to NIH, Subramaniam trained with Henderson at the MRC Laboratory of Molecular Biology in Cambridge, UK, publishing a dozen papers with him over the years.

As the Gobind Khorana Canada Excellence Research Chair, Subramaniam will establish and direct a laboratory located at UBC, aimed at bringing about transformative discoveries in cancer, neuroscience and infectious disease.

“We would not be able to undertake this path aimed at leveraging advances in imaging technology to improve patient outcomes if it weren’t for the generous support of the donor, the Canadian government, and VGH & UBC Hospital Foundation,” said Subramaniam. “I am proud to be part of a team of outstanding researchers here in Vancouver, working together to harness the true potential of cryo-EM to accelerate drug design. Our work has the potential to establish VGH, UBC and Canada at the forefront of the emerging era of precision medicine.”